The most common battery chemistries are lead, nickel and lithium, and each system needs a designated charger. Observe the chemistry when shipping and disposing of batteries as each chemistry has a different regulatory requirement.

Charging a battery on a charger designed for a different chemistry may appear to work at first but might fail to charge correctly.

Nominal voltage of LiFePo4 Battery is 3.2 volts but it can be charged up to 3.65 volts. We get 60.8 volts (nominal volt) by connecting 19 cells in series. When we fully charge the battery, it goes up to 19 x 3.65V = 69.35V which is called open circuit voltage(OCV). When we connect battery to any load the voltage drops approximately to 63 volts, which is called closed circuit voltage (CCV). Always check for the correct nominal voltage before connecting a battery.

Capacity represents specific energy in ampere-hours (Ah). Ah is the discharge current a battery can deliver over time. You can install a battery with a higher Ah than specified and get a longer runtime; you can also use a slightly smaller pack and expect a shorter runtime. A larger battery take longer to charge.

EV motor is the load which draws current from the battery.

Watt is real power that is being metered; Watt = Volt x Amp.

SoC reflects the battery charge level; a reading battery user is most familiar with. It is mostly displayed as Ah or % 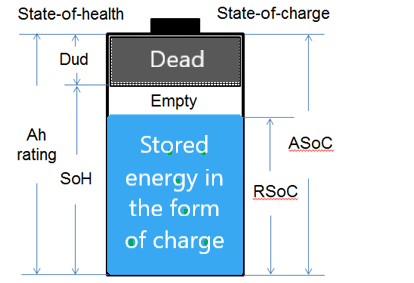 With the use and over the period battery degrades. Therefore, the state of battery health changes from 100% to 80%. There are three sections in the battery 1. The part which is dead (DUD) 2. The portion which is discharged and 3. The portion which has charge. See the picture.

The three main state-of-health indicators of a battery are:

SoH is commonly hidden form the user in consumer products; only state-of-charge (SoC) is provided.